The issue of poor power supply has a persistent problem in numerous countries across Africa, despite the abundant availability of natural resources. Hence, the need for exploring Renewable energy sources has become necessary in solving this power problem.

For instance, Nigeria has 63% of her land area covered with water with an average land height of 609.5m. The potential to produce hydropower is quite evident.

Hydropower still remains one of the key resources to enhance electrification to meet the existing demand especially for rural electrification. Small hydropower (SHP) in particular offers an ideal solution for electrification given its broad range of use and quicker deployment in comparison to large hydropower.

A number of studies have been carried out on the SHP potential in the country since 1980. One of such studies stated that the technical and economically feasible potential of SHP stood at a staggering 735MW.

The emergence of the minigrid policy has given new optimism in enhancing electrification quicker and at a more cost effective manner. Developing minigrids with SHP is essential to take advantage of the immense SHP potential in the country. Communities around water bodies such as those around River Chanchaga in Niger state, and the Asejire community in Oyo state are some of the numerous settlements that can benefit from SHP based minigrids. Such minigrids can be based entirely on SHP generation alone or as hybrids in tandem with other renewable energy sources like solar, wind et al.

The SmarT hydropower turbine by hydropower experts; Global Hydro Energy, is a prime example of such technology. With a generation capacity range of 100kW to 1MW, the SmarT is a SHP solution that can be used as a standalone or in a hybrid system using its Heros SCADA platform. This technology also assures up to 25% and 40% cost savings on civil works and electromechanical components as against conventional SHP solutions. Therefore, it ultimately translates to reducing the cost per kWhr. 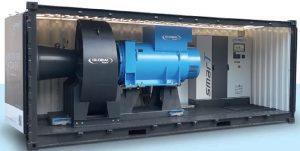 Geogrid Energy Company is the partner of Global Hydro Energy based in Lagos, Nigeria. For further enquiries, kindly contact us at info@geogridenergy.com